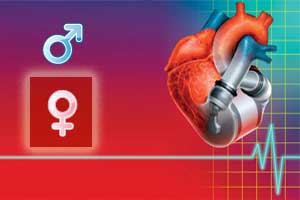 Diabetes has become one of the most common medical problems in adults. You may know that diabetes can lead to many other health problems, such as loss of vision, kidney problems, and nerve damage. You probably also know that having diabetes can increase your risk for having a heart attack or a stroke.

For a long time, health experts thought that these risks were greater in men. However, according to the results of a new study, just the opposite might be true—it could be that women have the highest risk. Plus, it seems the longer you have the disease, the greater your risk.

How does diabetes lead to heart disease?

Experts aren’t exactly sure how diabetes increases your risk for heart disease, but they know it does. The think that the problems come from having blood sugar that is too high for a long time. All that extra glucose in your blood leads to damage to blood vessels in different parts of you body.

The longer you’ve had diabetes and the higher your blood sugar levels, the greater your risk for damage. This is why it’s so important to know if you have the disease.

You might think it’s impossible for someone to have diabetes and not know it, but according to the American Diabetes Association, there are at least 7 million people in the United States who have diabetes or pre-diabetes and don’t know it! Past research suggests that some people could have diabetes for as long as 10 years before they find out they have it!

The study included about 74,000 people aged 25 and older. About 15,000 of them had diabetes, and of these, around 9,500 didn’t find out they had the disease until many years after it started.

The researchers then counted several different health-related outcomes for people in the study, including:

What the researchers wanted to know was:

The results of the study showed that both men and women with diabetes had a higher risk for these health problems than people without diabetes, and the risk was greatest in women.

Compared to women without diabetes, women with diabetes:

For women who didn’t find out about their diabetes until they’d had it for a while:

The risks of these same outcomes in men who found out late about their diabetes were about half what they were in women.

What do these results mean for you?

These results suggest that both men and women with diabetes are:

The risks for women with diabetes are greater than the risks for men with diabetes. Other results from this same study found that women were less likely to get their A1C checked, use insulin, or take medicine to lower cholesterol. All of these things could increase women’s risk for heart disease and death.

The truth behind trans fats

Keep your child fit to protect heart health for later!

Income may affect rate of obesity among teens

The Benefits of Pilates

The DASH Diet: Not Just For High Blood Pressure?

Fill Up On Almonds After Meals to Stay Trim